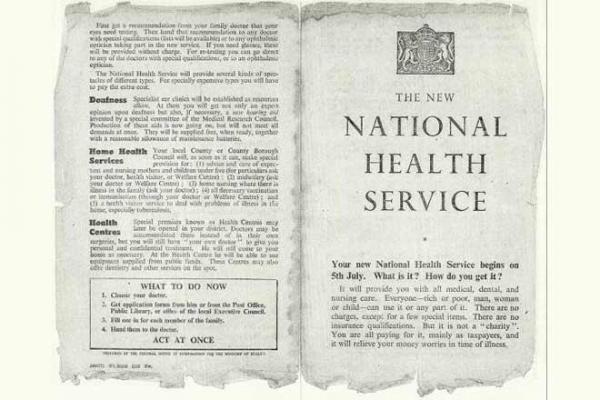 The preparations made to deal with the Second World War in health services were significant. Once the emergency medical service had been established in 1939, the question was not whether there should be an NHS, but what form it should take and who should be in control.

Plans for a comprehensive, free and unified health service

The white paper, A national health service, published in 1944, detailed the wartime coalition government's vision for a comprehensive, free and unified health service. The rationale for reform was the government's belief that healthcare should be made available to all, though a publicly organised service.

It was acknowledged that, while progress had been made in building up good services, not everyone could access such services and that access to healthcare had not been divorced from wealth. However, the paper insisted that the creation of a national health service was not intended to replace existing arrangements for healthcare provision:

'No unnecessary uprooting of established services, but the welding together of what is there already ... and incorporating it into larger organisations.'

While patient choice is most commonly thought of as a modern concept, the original 1944 white paper did refer to choice in the context of general practice, stating that:

'People must be able to choose for themselves the doctor from whom they wish to seek their medical advice and treatment and to change to another doctor if they so wish. Freedom of choice is not an absolute now.... but the present degree of freedom must not be generally diminished and....the service must not destroy the sense of choice and personal association which is at the heart of family doctoring.'

It was proposed that the new responsibility for providing the comprehensive health service would lie with the Minister of Health at the central level. At the centre, a new body was to be created to perform functions in relation to general practice.

Local responsibility would rest with local government (at county and county borough council level), operating over their existing areas and jointly over a larger boundary (joint authorities). In the 1944 white paper, the joint authorities would have a general duty to plan and administer a hospital service for their area, either through the direct management of hospitals, or though contracts.

At this point, the government did not plan on nationalising voluntary hospitals. There were many arguments between the powerful interests involved, resulting in proposals that were a difficult compromise and were later rejected by Aneurin Bevan.

While many of the principles of the 1944 white paper were reflected in the National Health Service Act 1946, the Act went further than had been anticipated in 1944. In 1945, Labour won the general election and Bevan pushed for more radical reform. He favoured nationalisation of all hospitals, whether voluntary or municipal.

Ministry of Health: Department of Health for Scotland.
A National Health Service.
SHA; 1944.